In this post I’m going to be talking about LLMNR and NBT-NS. That’s Link Local Multicast Name Resolution (LLMNR) and Netbios Name Service (NBT-NS). They are backup name resolution processes that take place by default in windows networking to help your PC resolve names it requests. However are they really helping you or actually causing you more harm! I’l talk about why its bad, and why we should look to disable it.

Ok so what is LLMNR and NBT-NS, whats it all about?

Link Local Multicast Name Resolution (LLMNR) and Netbios Name Service (NBT-NS) are processes that take place by default in windows networking to help your PC resolve names it requests. When you PC needs to resolve the name or a server for example to an IP address it firstly uses the DNS server it has been assigned. If the DNS Server doesn’t have the record you requested, your PC will use LLMNR and then NBT-NS. With LLMNR your PC will broadcast across the local subnet and ask other machines if they have a record for the name you are trying to resolve. If no-one answers, your PC will then try NBT-NS in the same manner.

Lets see it in action, in the below wireshark we can see 10.0.2.2 (Windows 7 domain joined machine) querying 10.0.2.10 ( Windows Active Directory DNS Server) for the record of DC2. DC2 doesn’t exist, and as we can see the DNS server responds ‘No such name..’. The PC then proceeds to use LLMNR and broadcasts across the subnet. No response is given. The PC then tries NBT-NS and again broadcasts across the subnet, no response is given. No response is given as no-one on the subnet has that record, I just made it up to demonstrate LLMNR and NBT-NS.

Ok so why is this bad, surely its a good thing right..?

Well yes and no, more no these days. Ordinary and back some 10 years ago LLMNR and NBT-NS were used in helping resolve names. If the DNS Server was unavailable local hosts on the same subnet would help resolve names. However lets face it if your PC can’t use DNS its pretty much not going to be doing alot in terms of network connectivity and services. LLMNR and NBT-NS are just not needed anymore (usually). Attackers can take advantage of the LLMNR and NBT-NS broadcasts by replying to them with poisoned responses. The poisoned response can essentially trick the PC into thinking that it knows where the resource is. The PC then attampts to setup an SMB challenge response, in doing so sends its credentials along to the attackers machine. An attacker is able to capture the username and LM, NTLMv1 or NTLMv2 hash of the user making the request. This can then be subject to an offline brute force attack using several different programs such as John the Ripper or OCLhashcat. Or be reused in a PassTheHash or SMB relay attack.

Lets see it in action from wireshark.

We can see our usual DNS request, then an LLMNR broadcast goes out, as the DNS server has no record. Our attacker on 10.0.2.3 (a kali linux machine using Responder) sends a response back to our PC ‘Standard query response,  DC3 is at 10.0.2.3’ this is actually the attackers machine fooling the PC. NBT-NS request hasn’t gone out at this stage as a response is received to the LLMNR. The PC is fooled into thinking the resource is at 10.0.2.3 and starts to negotiate an SMB session, passing along its credentials to the attackers machine.

What can we do to fix it?

LLMNR and NBT-NS are old methods for name resolution. You may have legacy applications in your environment that may potentially still use LLMNR and NBT-NS for broadcast name resolution. Due to this thorough testing should be carried out first. If this is the case get onto the vendor for some answers as to why! Otherwise we can disable both via GPO and DHCP options. For LLMNR there is native GPO setting. For NBT-NS there is no native setting however it can be set in the registry. The registry key references an interface name which has its own unique GUID so can’t be changed in GPO via a registry key change (as the key will be different every time), however we can use powershell and do a ‘catch all’ on that key and thus script and then run via GPO. I’ll demonstrate below. 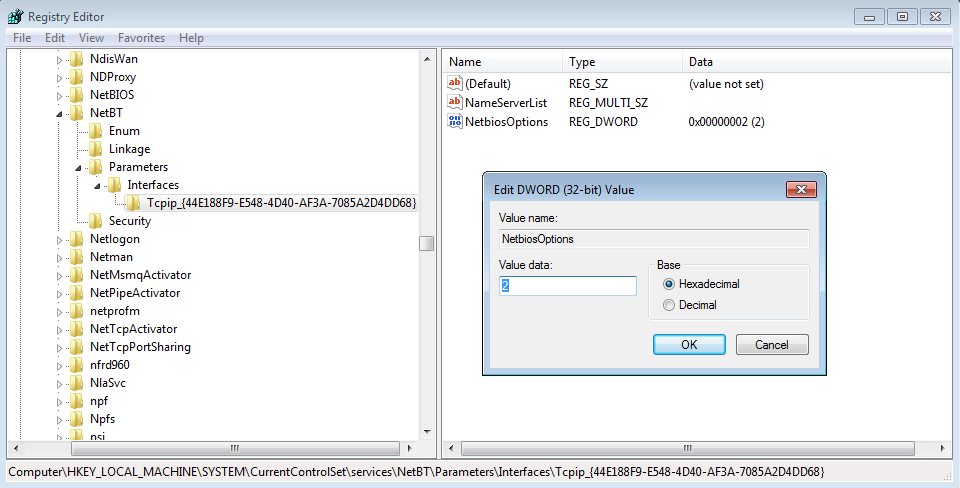 This can then be scripted and set to run via GPO.

The process for disabling both are in the below video:

It obviously goes without saying the appropriate testing, change control and usual roll out procedures should apply especially with a change like this.