‘Drown’ Vulnerability in SSLv2 and TLS. 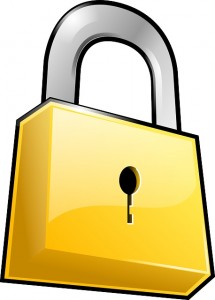 This week sees a new vulnerability in SSLv2 and TLS. The ‘Drown’ vulnerability standing for “Decrypting RSA using Obsolete and Weakened eNcryption”, this is already sounds pretty harrowing to anyway in the security field, anything with RSA decryption and weakened encryption you know is not going to be good. Matthew Green does a great job in explaining all about this so I won’t attempt to regurgitate his excellent explanation, other than to highlight the issue and to say this doesn’t look good at all and I encourage you to read his blog and take note of this vulnerability:

This just highlights that fact that when a penetration tester tells you you still have SSL issues present on your sever you should definitely look into doing something about it as described by myself here: https://www.adamcouch.co.uk/2015/09/10/changing-ssl-tls-cipher-suites-in-windows-and-linux/

I thought I would share with you the Lab I have been mostly working with for CCNA  Security (CCNAS) – Implementing Cisco Network Security (210-260) exam that I have recently took and passed. I have also used several smaller lab setups for specific testing however this is the main lab to piece everything together.

The lab has been built to accommodate the many elements on the exam and covers off most of the practical procedures that you need to be comfortable with. Using GNS3 and VirtualBox we are able to lab most of the practical exercises bar the L2 switching portions which I achieved through physical equipment (Catalyst 3750, 3550 x2 and 2950 switches). The exam does cover many topics in theory that you must know, these aren’t covered here, however can be found on the Cisco website.

The lab contains several client machines for managing the routers and ASA firewalls from putty, cisco configuration professional and ASDM as well as testing PAT through the ASA with a breakout to the internet. There is an Active Directory Domain Controller with the Network Access Protection role installed for use with AAA/radius and NTP. A separate syslog server. A DMZ with web server for testing NAT and outside firewall rules. There is also an ASA 5520 at each of the three sites for testing VPN site-to-site Ipsec connections, clients at all sites for testing end to end connectivity. There is also an outside remote client for testing the Anyconnect and client-less vpn options which takes advantage of the AAA radius service.

Using this lab we are able to address the following practical elements for the CCNAS exam:

Well what next, CCNP Security of course.

We can harden the Windows Client/Server Remote Desktop Protocol (RDP) in several ways using either local settings or preferable through Group Policy. As a minimum we should harden RDP in the following ways:

This post will we go through how we can accomplish these tasks.

Network level authentication allows the client to authenticate earlier in the remote connection process rather than the normal process.  This option is most commonly seen in the Remote Desktop settings in the system properties as below:

However it is far easier to set this via Group Policy and distribute to all your Servers as below:

This can be applied to both Servers and workstations from Windows Vista and above.

Setting the Encryption level to High encrypts data sent from client to server and server to clients using 128 bit encryption. Like with the above example we can set the Terminal Services Encryption level to High either locally on the server or via Group Policy. In a domain environment the GPO is the way to go. With windows server 2008 this could be set locally through the GUI by navigating from the start menu–>Administrative Tools–>Remote Desktop Services–>Remote Desktop Session Host Configuration, then double clicking on the ‘RDP-TCP’ connection in the middle of the screen. The Encryption level can be found on the General tab as below:

Unfortunately Microsoft removed the  ‘RD Session Host Configuration’ options as standard with Server 2012 R2. Rather than adding in the whole RDS role to apply this option in the GUI you can apply it via GPO which will in turn apply to both 2008 and 2012 as below:

Force the use of TLS 1.0 protocol as a transport layer for the service

Forcing the use of TLS 1.0 mitigates the risks associated with SSL 3.0 protocol. Like with the previous option this can only be set in the GUI locally on Windows Server 2008. With this being said, and from a management perspective GPO is our preferred option, in order to apply this setting to both Windows Server 2008 and 2012.

This option is set in Windows Server 2008 locally by navigating from the start menu–>Administrative Tools–>Remote Desktop Services–>Remote Desktop Session Host Configuration, then double clicking on the ‘RDP-TCP’ connection in the middle of the screen as below:

The GPO is located here:

This hardening technique can be accomplished by enabling the ‘System Cryptography’ through the Local computer policy editor or through GPO via the domain. It will force the use of FIPS-140 compliant cryptography for either the client or server across the system. This is windows system setting rather than an RDP setting, however by setting this you will be forcing the use of FIPS-140 compliant cryptography for Remote Desktop settings. If this setting is enabled only the FIPS-140 approved cryptographic algorithms are used: 3DES and AES for encryption, RSA or ECC public key for TLS key exchange and SHA256, SHA284 and SHA512 for TLS hashing. In the case of Remote Desktop it will only use 3DES.

Adding through the local computer policy can be achieved by opening a Microsoft Managment Console (MMC) adding a snap in; Group Policy Object Editor. As below:

Setting via GPO can be achieved as below:

Putting all these settings together in one GPO would look something like this:

It clearly goes without saying you should first test these methods out for yourself in a safe test environment first before diving into your main production domain or web servers. Adding higher grade encryption to your communications across the domain may have extra computation costs in terms of performance on your network.

How do I know which cipher suites to select for my web server?

This is a common issue, sysadmins have their web servers up or vpn servers configured. However they are often using older SSL protocols and older cipher suites that are now vulnerable to attack in certain scenarios. We need to understand what a cipher suite is actually doing in order to select the correct ones.

For SSL/TLS connections a cipher suite is selected based on a number of tasks that it has to perform, the client uses a preferred cipher suite list and the server will normally honor this unless it also has a preferred list, set by the sysadmin.

Initial Key Exchange, the Asymmetric Encryption: This will most commonly be RSA, however the following are options; RSA ( Ron Rivest, Adi Shamir, and Leonard Adleman), DH (Diffie-Hellman) or  ECDH (Elliptic Curve Diffie-Hellman).
RSA key length should be 2048 bit minimum. ECDH and others should be an equal strength, note the ECDH key length will be significantly lower due to the way the algorithm works! The Asymmetric Encryption is only being used in the initial key exchange and for the session symmetric encryption key. The Asymmetric encryption method could be used for the data transfer however the computational power needed is far higher than the symmetric Encryption due to the key size.

Session data, the Symmetric Encryption: The most commonly used three ciphers we see in use being RC4, 3DES and AES, careful selection of ciphers is required here:

Many other options are available that are not so common include Blowfish, Twofish, Serpent etc. I won’t be going into the different ciphers here or the difference between Block (3DES+ AES) and Stream (RC4) on this page, I’ll save this for another blog.

Digital Signature – The digital signature is used to verify the server.

Integrity check – Here SHA-2 or SHA 256 (Secure Hash Algorithm) should be used. MD5 and SHA1 are being phased out due to weaknesses. SHA1 will still be seen on certificates however Google Chrome will now show a warning for this since October 2014. Microsoft has a deprecation policy indicating SHA1 issued certificates should not be used after 1/1/2017.

With all that being said, lets look at a typical cipher suite. Below is what you might commonly see in the likes of Firefox if you click on the padlock in the address bar and then click on more information.

Lets look at the cipher suite below for an example. We’ll break down the individual blocks to see what it actually all means.

TLS – The protocol in use
ECDHE – Elliptic Curve Diffie-Hellman key-exchange using ephemeral keys. More on ephemeral keys later, however this is what is going to give you that all important ‘Perfect Forward Secrecy’. Marked with the E at the front or behind for Ephemeral.
ECDSA – Elliptic Curve Digital Signature Algorithm, used to create the digital signature for authentication.
AES_128 – Advanced Encryption Standard 128 bit key size, used for the session encryption method for data.
GCM – Galois/Counter Mode an operation for block ciphers designed to provide both data authenticity (integrity) and confidentiality. GCMAC – provides authentication only.
SHA256 – Secure hashing Algorithm 256bit used for message integrity.

With the above knowledge and knowing the current vulnerabilities in SSL and TLS we can now make an informed decision and build the cipher suites we would like to use in Windows and Linux. 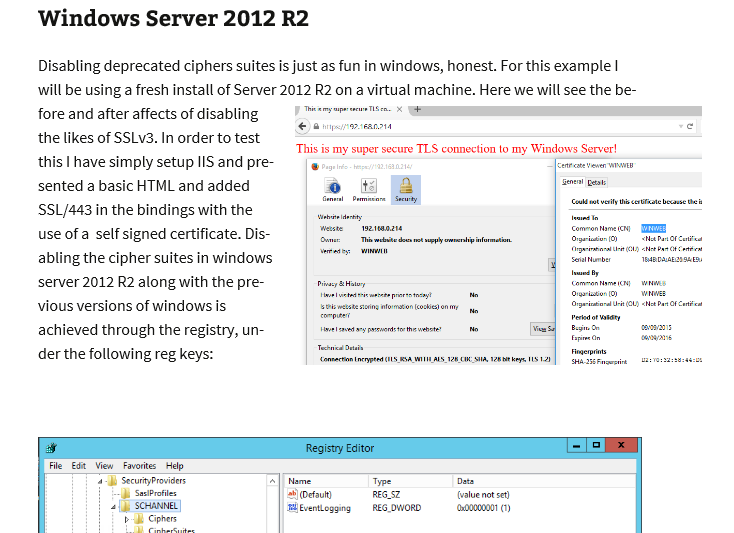 I have added a basic guide for changing SSL TLS cipher suites that Windows Server IIS and Linux Ubuntu Apache2 use. Allowing only secure ciphers to be negotiated between your web server and client is essential. This guide will go through how to change and select the different ciphers for both Windows server 2012 R2 and Ubuntu 14.04 in order to help mitigate some of the vulnerabilities in the SSL/TLS protocols.

OK so with a my new website up my first thought was ‘right lets secure it!’. Now if only more people thought this way surely we wouldn’t see half the info sec issues we see today. So I’m probably slightly biased on the subject being a Pentester. Not sure if biased or paranoid is better word.

I’m supposed to be on holiday in wales for the bank holiday however 8 hours into the site build and can’t help but think, security. A few tasks later and I navigate to Qualys, lets see where we currently stand, 10 minuets later and I’m building a Kali 2.0 virtual machine in Virtual Box on my laptop in the hopes of pentesting it over 3G!

So a Grade B on ssllabs.com . A little work needed I think. 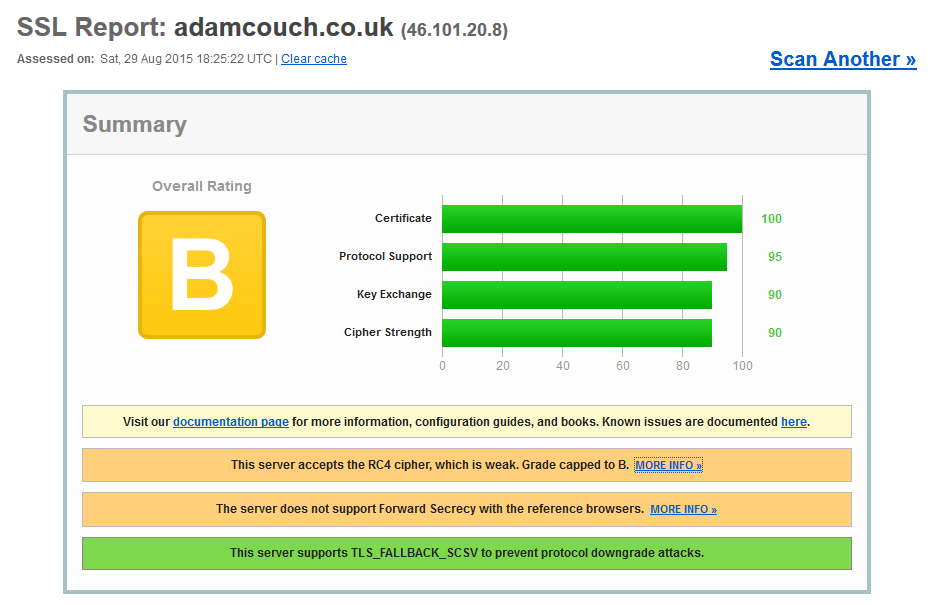 Qualys.com is a great resource for scanning URL’s to see what SSL/TLS cipher suites are in use. Check it out!

By the time I had finished typing this post I was up to a A- having disabled RC4 in the SSL.conf file in mods-enabled folder be appending the ‘SSLCipherSuite’ with :!RC4. Disabling SSL v2 and v3 is also a simple step by appending the ‘SSLProtocol’ line with ‘-SSLv3 -SSLv2’ in the same file.

This is very much only a small step towards securing a site, although a good start! 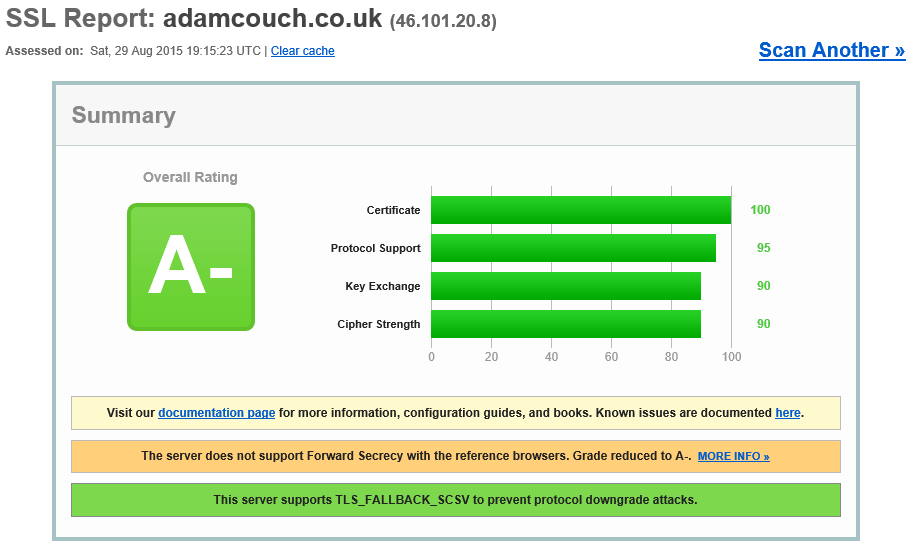