I have spent many hours reading various blog posts and articles in my quest to get the Cisco ASA working in GNS3. Not just working but to a point where it runs stable, be able to save the running configuration, save the project in GNS3  and then reopen it all back up and for the configuration to be there working.

Here are the steps I have successfully used to get the Cisco ASA working correctly in GNS3. For this example I will be assuming you have already added the ASA and a workstation like XP to GNS3 in order to access the ASDM. We will just be working very simply with a single ASA and an virtual XP machine directly connected, as below.

Install the latest version of GNS3 at this time I was using ‘GNS3-1.3.8-all-in-one.exe

Setup your XP machine and import it into GNS3

ASA files you will need:

Extra Files for the XP machine.

First we need to create a flash drive for our ASA, we can do this with qemu-img.exe as below: 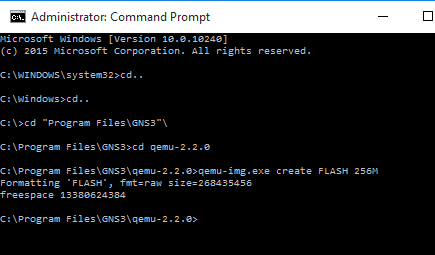 Now to configure the Qemu options, I use the below options:

I have had various instability issues with ‘Active CPU throttling’ ticked, at times the console has hung, so if you find this happens to you untick this.

You will have already added the initial RAM disk and Kernel image when added the ASA to GNS3. 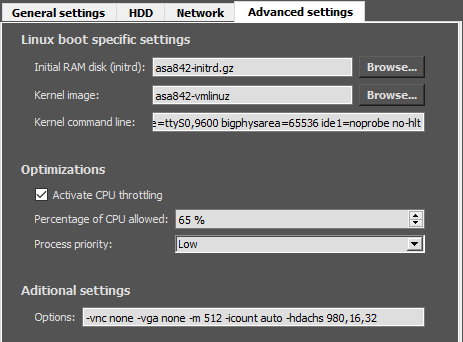 Set the Kernel command line to:

Make sure you apply the changes!

Apply these changes on the first start up!

When you start the ASA apply these changes first:

After the second boot sequence you can start making configuration changes.
Save your Project in GNS3 at this point.

Here is some initial configuration to get the ASA up and running.

Once the ASA is up check connectivity between it and the XP machine with a ping.

Copying ASDM to the ASA

We now need to copy the ASDM image to the ASA. For this you will need to have the ASDM image on the XP machine and installed a simple TFTP Server such as SolarWinds-TFTP-Server.exe.

This should now be copying over the ASDM image.

I have encountered disk/flash issues occasionally when saving the running config, Cisco has a built in file check utility to fix these type of issues called the fsck utility. This does automatically run when you boot up the ASA however to manually run it run the following: